When Jack and I told family and friends we were going to ride across Australia, quite a number were very skeptical.

A few even told us outright “You can’t do it.”

We stopped visiting a family member because each time we did he would list the reasons why we couldn’t do cycle across Australia.

During our ride one of our support team (Chris from Chisel Fitness) was making lunch in a park – an old local came up to him and asked what was going on.

Chris told him what we were doing.

The local told him we’d never make it to the top of the hills we were about to battle.

1. Told the old guy that whatever he did he was not to tell us what he’d just told him
2. Put on his bike gear to ride that next section with us!

Their Limitations, Not Ours

It’s a funny thing, but people apply their own limitations to others.

Because they could never do it, they assume we couldn’t either.

Nothing To Do With A Bike Ride

What we did wasn’t really about riding a bike. It was teaching Jack stuff.

Stuff like goal setting, preparation, perseverance, planning and much more.

Before we got to the bottom of that mountain we knew we were going over.

And here’s the other thing – my 14 yo son Harry (that’s him on the left below) rode with us for that section. He rode the hill easily, despite not having trained on big hills.

I guess because we didn’t even think for 1 minute we wouldn’t get over it, he didn’t either. 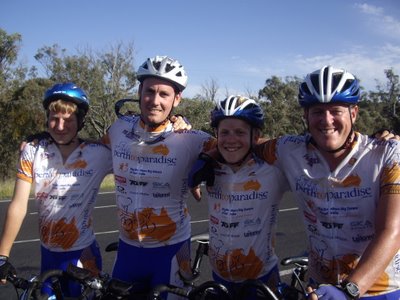 It wasn’t all smiles on the hill though. Here’s me 10 minutes earlier!

Whatever challenge you face today, you can do it.