Robbie McEwen is an Australian guy who is one of the world’s best (if not the best) cyclists – Robbie is an incredible sprinter and has won just about everything you dream of winning as a cyclist.

He’s back home in Australia at the moment and has just raced (yesterday), and won, the Waeco Darren Smith Cycle Classic was run at the Peppers Salt Resort at Kingscliff, about 30km from where I live.

Darren was a highly talented cyclist who was tragically killed on a training ride here on the Gold Coast in 1994. Robbie was a good mate of Darren’s and has often spoken of his desire to be his best in memory of his mate.

I wandered down to take a look at the race, with my 2 sons – Jack and Harry – in tow. Jack in particular loves his cycling and Robbie McEwen is his favourite cyclist by a mile.

He found it amazing that we were watching Robbie in the Tour De France a few weeks back and here was Robbie standing just a few metres away.

Robbie McEwen won the Darren Smith Cycle Classic and we were right there at the presentation. I said to the boys, “C’mon guys, let’s go and introduce ourselves to Robbie and get a picture.”

Being ultra-cool 13 and 15 yo boys they couldn’t possibly do that (!), but no such embarrassment for their old man.

I went up and introduced myself to Robbie and had a quick chat and motioned the boys to come over and meet him.

Jack came over and met Robbie, but Harry was too embarrassed/shy/dopey.

Robbie was more than happy to pose for a photo with Jack and have a quick word.

If I can draw a bit of a bow, I’ll compare what Robbie has done to what you might do in business.

What Robbie has done here is provide great value.

It’s what you must do in business each and every day.

Robbie has had a guy come along and ask for a photo with his kid. Robbie provides value by:

Now, as you can see by the photo Robbie is a pro at this stuff. He’s not standing there with his hands by his sides, without a smile waiting for the photo to be taken.

What’s he’s done is seize an opportunity and provided a ton of value to Jack (and I). Take a look. 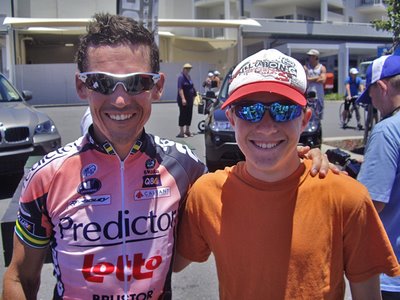 As a high profile superstar in cycling Robbie must get these sort of photos requests thousands and thousands of times. It would become, I’d imagine, boring and repetitive.

Now I’m sure Robbie wasn’t thinking, “Okay, here’s a kid who wants a photo – I’ll be nice to him and he’ll be a bigger fan, his brother will cycle more, it will help cycling grow as a sport in Australia and my team Predictor Lotto will sell more merchandise……and his dad might write a blog about me!”

Like when you provide value in business, he’d be thinking something like, “How can I make this contact with Jack a positive influence. After all, he’s provided me value by being kind enough to come and support me in the race, cheers for me when I race and loves the sport I love.”

That’s the thing about value – when you provide great value in a positive way, you usually get a ton of value back.

P.S: I’ll be willing to bet that next time Jack gets a jersey he’ll ask for a Predictor Lotto one!

P.P.S: Robbie’s young son was there on Sunday – the little fella has the coolest name ever: Ewen McEwen.