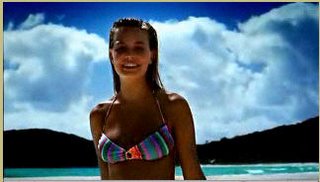 Here in Australia the media is in uproar because an ad developed by the Australian Tourism Office has not been allowed to be shown in the UK because it contains the word “bloody”.

I should rephrase that – Here in Australia the media has pretended to be in uproar etc etc.

This TV advertisement was rejected because in the final scene the girl says “So where the bloody hell are you?”

So the media have got hold of the story and run it into the ground. I’d assume they’re saying the same things in the UK.

The newspapers today are filled with indignant letters from outraged Australian’s that the ad has been banned because of the use of the word “bloody”.

And every single letter or news article on the issue has some pun using the word bloody.

But that’s not my point (but couldn’t these letter writers be just a little more creative!).

It’s easy to generate publicity. The banning of this ad in 1 country because of the use of a not-very-offensive word was all it took to increase the viewing of the ad probably by 300%.

You need your marketing to be a story. That is, people need to talk about your product or service.

Did The Ad Agency Or Client intentionally Get The Ad Banned?

I guess the question is “Did they develop the ad with the intention of getting it banned?”

Probably not. But I’d guess they developed the ad with the intention of it being controversial. The ad being banned is just a bonus.

One that they probably anticipated and an aspect they’d be delighted about. (Although you would think the ad agency knew the content restrictions on the ads they produce for the UK market and that they’d know it was a good chance to be banned.)

How Can You Be Controversial?