Mike Arrington over at Tech Crunch has a story about a current poll on who is the sexiest female blogger (obviously if it was the sexiest male blogger I’d top the poll……don’t blame me, I’m just naturally hot!).

The woman featured in the spot were asked (and gave) for permission to be included in the story.

Now a few are kicking up about the fact that Playboy has said they’ll be asking the winner to pose nude. 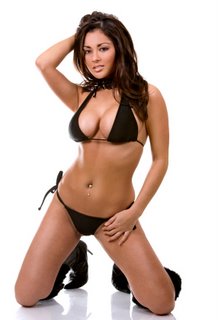 As Mike reports, one blogger, Sarah Austin, emailed Playboy and said: “My parents found out about this feature on playboy and are not happy about it. I’d like you to remove me from the contest.”

Mmmmm Sarah. I think it’s a little late for that don’t you?

Every businessperson has to be aware of the strategic nature of the decisions they make.

For example, every single word I write on this blog has the ability to benefit my positioning in the marketplace or negatively impact.

The benefits can be in the form of a lead because someone likes the way I write or what we offer.

The negative is usually the morons/haters who email me abusive stuff because they don’t like what I wrote, don’t like a strategy I’ve employed or are just grumpy because they’re stupid! ;o)

Like this after I wrote in the SitePoint Tribune and said “When we come across prospects like these, all is not lost. There are numerous ways to skin a cat, as I explain below”:

This was the bit of feedback:

“I just signed up for your newsletters yesterday and received my first issue this morning.

As one who has two pet cats in my household, whom I consider to be near and dear to my heart, your repeated references to skinning a cat are, at best, repulsive.

Surely you could have found a better metaphor. Call me what you may; but, by standards of first impressions I’ll never read a SitePoint newsletter that I won’t have a bitter taste in my mouth as a result of this initial encounter.”

These female bloggers in the Playboy poll sold out to get the link from Playboy and to get the lift in their profile.

And now some have the audacity to bitch and whine that Playboy will be offering the winner a nude photo shoot.

But, let’s face it, they’ve already shown they’ll be willing to be associated with Playboy for a benefit (that link and the exposure) so history tells us they may well go naked for $$$.

It’s all strategic. Everything.