Yesterday I took off from the office at 3 pm and went for a 50 km bike ride with my 14 year old son Jack (that’s him on the right running the final 10km at last year’s Noosa Triathlon).

We left suburbia and rode out into a nearby country valley – Tallebudgera Valley.

25 km in and the road ends. As it’s a bit of an uphill climb Jack and I had a bit of a rest and a stretch before riding home.

On the way out of the Valley you can get up a bit of speed – we decided to go hard for the first 6 or so kms coming out.

So there we are.

45 km/hr on A Straight Country Road

I’m in the front. Jack’s tucked in behind me making the most of the drafting. We’re doing 45 km an hour on a quiet straight country road.

I’m totally focused on the road ahead. It’s the lead riders’ job to avoid the potholes, miss the glass, find the smooth road and generally ensure the safety of the rider(s) behind him.

So that’s what I’m doing. I’m looking at every detail of the road as we zoom through. I miss nothing.

I glance back at Jack as we’re racing along and say “You right mate?”

Then he says “Bit hoarse.”

Coming Down With A Cold? 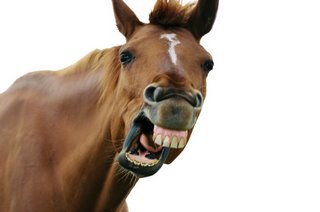 I’m thinking he must mean he’s coming down with a cold and his voice is a bit hoarse.

That was until he yelled it again after he’d dropped 20 metres off my wheel.

I looked up and it was at that moment I slammed the brakes on and then slammed into a horse’s ass!

Standing in the middle of the road facing the other way was, as Jack tried to warn me, a “Big horse” (not “Bit hoarse”). Just standing there.

He didn’t hear us come up behind him until the last minute – then he took off running. By the time I’d slammed the brakes on the horse was running, so I didn’t hit him too hard at all.

Just a glancing blow. The horse was fine and turned to give me a bit of a glare after he’d trotted down the road. 50 metres further on was a lady who was trying to catch the horse and get him back in his paddock.

I Was Focused On The Little Stuff

That was bad riding of course.

I was too focused on the little stuff – I was looking at every minute detail on that road when I should have also kept an eye on the big picture.

Because it’s no use avoiding the potholes if you ride straight up a horse’s ass.

And that is the best business management analogy I’ve ever experienced.