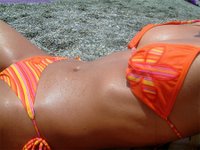 In these enlightened times you could probably develop a good argument that sex doesn’t sell any more. That we’re now too ‘civilised’, too aware of sensitivities related to using sex to sell or just plain over-exposed to pretty women or men being used to sell something.

But all that would be wrong. Sex sells. And as politically incorrect as that may be, it’s true.

1. My local hotel runs a promotion on Friday afternoons from 4.30-6.30 pm where bikini-clad girls serve the drinks. The busiest time at the hotel is, you guessed it, Friday afternoon from 4.30 to 6.30 pm. As soon as the girls cover up the guy patrons leave.

2. The most clicked on link ever from one of my newsletters was the Dec, 2005 issue with the words “Anna-Nicole Smith“.

3. The current affair type TV shows here in Australia will go out of their way to show sexy footage if in any way, shape or form it relates to the story they are showing.

Should You Use Sex To Promote Your Product Or Service?

Should you use sex to promote your business? Maybe, maybe not. If it ‘fits’ then probably. By that I mean it would probably be appropriate and effective to use the above image of the bikini-clad body to market your tanning lotion.

But the image might not be such a good fit if your product is bike helmets.

But then again, if you use the image in a way that connects with your target audience – whether that’s cheeky, fun, whatever – and is consistent with your brand it would probably work. And then we could touch on marketers who use sex in their advertising to create controversy to generate attention for their product or brand (that links leads to an article that talks about a shoe brand using sexual imagery – it includes this: “The National Women’s Media Centre called on women offended by the billboards not to have sex with men wearing the shoes.” Mmmmmmmmmmmmm.).

To Ensure I’m Not Seen As Favouring One Sex Over Another……..Here’s One For the Girls!