Dick and Rick Hoyt comprise the simply inspirational Team Hoyt – these guys have tackled some amazing challenges that have to be seen to be believed. 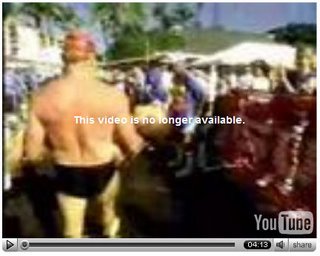 On YouTube there was a video of Dick and Rick competing an Ironman Triathlon (amongst other things). Sounds tough.

But it’s even tougher when you see the 50+ year old Dick tow his son’s boat in the 3.8 km swim, tie Rick into a special seat on the front of his bike and then cycle 180 gruelling kms and then place Rick into a pram/mobile chair and push him for the full marathon.

That video has been taken down.

Protecting Your Brand At All Costs

Is that protecting your brand? Not sure.

What I do know is the Team Hoyt video was inspirational to millions of people.

And I have no doubt it has inspired thousands of people to take up triathlons or some other exercise. That’s not such a bad thing.

But the World Triathlon Corporation don’t like a bit of vision or a logo or whatever being used without permission. So they get the video pulled.

Maybe a blanket policy isn’t always the best policy. Maybe if something helps your event, inspires people and helps the obesity crisis then maybe, just maybe, you need to let it be.

I’ll try and find out more.