It’s 10 years today that my then 15 yo son Jack and I started our 4,500 km cycle across Australia in 30 days – from Perth, WA to Surfers Paradise, Queensland.

He became the youngest person ever to cycle across Australia and we raised $30,000 for youth mentoring charity Big Brothers Big Sisters in the process.

It was an important catalyst for many things to come in the future and a fair effort for a young kid to average 150 km a day on the bike, with the biggest day being 260 kms.  We learned a few lessons.

The biggest lesson we both learned on that ride was this: anyone can do it.

I remember Jack and I having a coffee/milkshake about 80 kms from the finish with a couple of friends.  One of the friends asked Jack,

“Mate, do you feel like you’ve achieved something special?”

His answer was a good one: “No, anyone can do this. Just have to train a bit.”

And it’s true. Anyone can do it.

Basically all we did was cycle 50 kms, three times a day. Easy!

The legacy of such a challenge ripples out and impacts on others.

A few weeks after we finished, our 17 yo daughter said at dinner “You know, after Jack finished that cycle, I feel like I can achieve anything I set my mind to.”

That’s why, at age 22, that same young lady who had barely done any running previously, ran her first marathon.

Lesson # 3: Resilience. Just get on with it

So he gets stuff done.

His biggest challenge of all was overcoming a near fatal accident while on a training ride in 2016, 4 weeks out from the Cairns IRONMAN.

He was struck head on by a turning car and thrown through the air.

Jack had the perfect good sense to land within metres of a doctor jogging past the scene.

She revived him on the side of the road (along with another couple of wonderful women) and he was transported to hospital with critical injuries including: 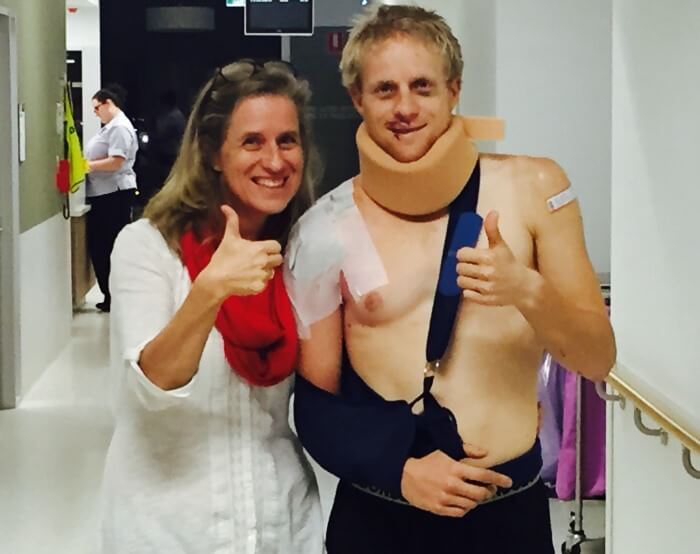 He recovered over the course of the year, got back on his bike and went and finished that Ironman 12 months after his accident. As you do.

Lesson # 4: Keep going – you have no other choice

Keep going. That’s the big lesson.
Life will throw some stuff at you.  Brush it off and keep on going.  Because life is here to enjoy.